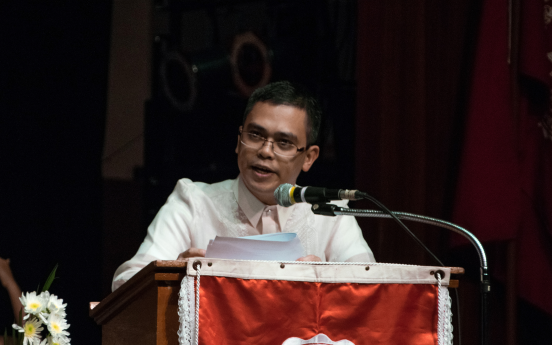 EXCELLENCE, NOT PERFECTION: Excellence is being the best that one could be; it does not mean perfection, since perfection will only result to constant disappointment, says Silliman alumnus and Associate Solicitor of the Office of the Solicitor General, Atty. Ivan Maxino Bandal during the 60th Annual Honors Day Convocation last Feb. 12 at the Luce Auditorium.

Excellence is not about being perfect but it is about going an extra mile and standing up despite failure, said Silliman University (SU) alumnus and bar topnotcher Ivan Maxino Bandal in his message to students during the SU’s 60th Annual Honors Day last Feb. 12 at Luce Auditorium.

“Excellence also means being able to work on failure and being able to rise up every time we fall,” said Bandal as he narrated how he bagged the 6th place in 2012 bar exam.

He recalled as he was answering number 30 out the 100 item bar exam, his mind stopped working and he felt cold and sick.

“I had an extreme fatigue because I was unable to sleep the night before… I thought that after eight months of hard work, my journey will just quickly end,” he shared.

Though he could choose to retake the exam the following year, he said his determination made him refuse to quit.

“I paused took deep breaths and I prayed hoping that God will provide me enough strength to at least finish the exam. Thankfully after five minutes, I recovered,” he said.

Bandal said how a person deals with hard situations determines whether or not one will be successful in achieving goals.

He emphasized that failure is not just in terms of grades, but in its “many forms including disappointments, embarrassments, rejections, failed plans, unfulfilled promises and expectations.”

“Even the development of our most common products used today, smart phones, cars, computers, entail experiments in research where creators were not immune from failure, but because of their perseverance, they achieved worldwide success and recognition,” said Bandal.

He said disappointments and failure is inevitable but it is alright as long as people learn from them and refuse to give up.

However, he reminded the honorees not be too hard on themselves.

He recalled his experience as a writer in the Weekly Sillimanian and member in other campus organizations when he felt frustrated for feeling like his works were not good enough.

“Look up to God and pray. Ask for his guidance that you may be able to surpass and overcome everything that may come your way. In everything you do no matter the circumstance. Put God first,” he said.

Bandal pointed out that there are many forms of excellence and all of them are a gift from God that has to be used for good works. He said the world outside SU is full of challenges, but Sillimanians should let “Silliman Spirit” shine in their workplace.