OUR ENVIRONMENT IS CONSTANTLY CHANGING. THE INFLUXES OF NATURAL DISASTERS AND  ENVIRONMENTAL CONCERNS ARE QUITE ALARMING. IN THIS DAY AND AGE, PEOPLE NEED TO BE AWARE OF WHAT TYPES OF ENVIRONMENTAL PROBLEMS OUR PLANET IS FACING. 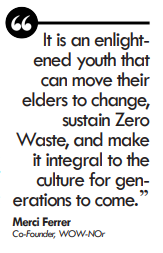 According to the Global Alliance for Incinerator Alternatives (GAIA), Southeast Asia, with the help of ASEAN, is considered one of the world’s fastest growing regions. Unfortunately, industrialization and economic growth have come at a heavy price: It has left the environment and people behind.

Going to a more local context, for instance, in Manila, the growing and uncontrolled population adds to the problem. A lot people are migrating to Manila to find jobs and a place to live. However, the high cost of shelter forces some of them to become squatters. Because of that, they live under bridges, along river banks and beside railways. As the population grows, pollution from these places became worse. It causes floods because the drainage is blocked by trash.

Although we could never stop the rapidly growing world population and the increasing use of energy that places heavy pressures on earth and our environment, solutions will have to be found.

Environmental initiatives in Dumaguete
In the past years, local non-government initiatives by GAIA, Mother Earth Foundation, and War on Waste Negros Oriental (WOW-NOr) as well as youth leaders from schools here have been working non-stop in implementing more sustainable advocacies that will truly lessen the problems faced by our environment. “Solving Dumaguete’s waste crisis requires changing human behavior and one of the ways to do it is through the youth. It is an enlightened youth that can move their elders to change, sustain Zero Waste, and make it integral to the culture for generations to come,” said Merci Ferrer, co-founder of WOWNOr.

Among those initiatives would be practicing waste segregation, reusing/recycling and installing Materials Recovery Facility (MRF) in every barangay in Dumaguete City, the STRAW WARS campaign of Silliman University (SU) students calling for resort and cafeteria owners to do away with straws and the Plastic-Free Dumaguete, a beach cleanup held every Saturday.

The latter is an initiative started by twelve-year old Miguel Teves, a 6th grader at Southdale Integrated School. “As a Dumagueteño, I don’t want to be passive about (the pollution that) I see,” Teves said.

In SU, the Environment Committee of the Student Government currently heads the “MaSEAkap at MaSEApag na Batang Dagat,” a monthly community outreach. It helps spread information regarding the petition to ban plastic bags in Dumaguete City, among other initiatives.

Julmar Misa, Student Government Environment Committee Chair, said, “I believe that the best way to change the mindset of the people so that they will give more value to the environment is to show them that it is possible to live life with lesser or no plastic at all.”

The role of youth for a cleaner and greener environment
Future generations are so much affected by today’s course of action because concerns such as the depletion of resources, the loss of biodiversity and radioactive waste are everywhere and they will not go away in a snap.

Apart from having a greater challenge in the more distant future, young people are also the hope of good things to come. Young people have better access to information about the environment than their elders. They can introduce fresh ideas and outlook to environment-related issues because anti-ecological ways of thinking and behaving are not ingrained in them. A major reason why the youth ought to take the lead in protecting the environment is stronger awareness of the issues and a greater stake in long-term sustainability.

What now?
The point right now is to not feel defeated. Instead, we should have faith and a change of mindset because when we truly change our minds, the world starts to change, too. And this is where the hard work kicks in. What we need to do is to unlock the creativity and innovation that can turn us away from social and environmental disaster to a cleaner, greener and sustainable living.