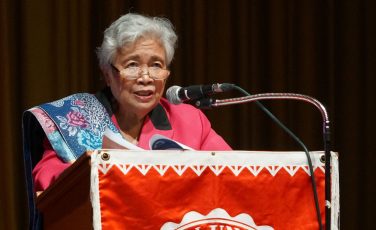 Education Secretary Leonor M. Briones said with the increased budget for Education in 2018, DepEd would focus on massive hiring of teachers and providing for salaries and benefits of public school teachers and staff as mandated by law.

As mandated by the constitution, DepEd has the lion share of the 2018 national budget of P3.767 trillion.

The Secretary said DepEd will probably be hiring at least 100, 000 teachers this year. The initial target was to hire 81,000 new teachers, but the demand increased since the Department still has to catch up with the demand for teachers from earlier years.

Currently, there are 687, 229 teachers both in private and public schools Briones said. However, there are at least 26.6 million learners from kindergarten to Grade 12.

She added, “We are bigger than the AFP, PNP and all the military establishments put together.”

The highest (pay) for a master teacher “if you are really the best teacher with high performance” will have to be at least P52, 000.

Among other benefits for teachers in 2018 are: increased uniform allowance of P5,000 to P6,000 plus; mid-year bonus which is equivalent to a month pay; a cash gift of P5,000; cash allowance of P3,500 and productivity enhancement incentive of P5, 000 per year courtesy of the local government.

Their performance based bonuses also now range from 50 to 60 percent of their basic monthly salary depending on the school.

Plus teachers who earn below P250, 000 annually will even be not paying taxes or they will be paying minimal, Briones added.

On the other hand, the Secretary said that the Department will be offering department-owned provident funds especially to newly- employed teachers to discourage credit from lending institutions.

“[Teachers, especially the newly appointed], claim and they say the reason why they borrow because they are not paid immediately once they enter, that’s why they need to borrow,” Briones said.

The department is also working out with the Professional Regulation Commission to create a national education academy to train teachers in order for them to get positive building for free.

“But of course, it is always a choice. There are those who cannot afford private service providers and so we want our own training program to be accredited,” she said.

On the other hand, aside from the improvement in teachers’ salaries and benefits, she said the budget includes P175 billion allocation for school buildings, classrooms and equipment.

“Everyone loves teachers because nearly everyone comes from a teacher dynasty. If you are an engineer, a lawyer, a politician or a scientist, somewhere along the line, the teacher saw to it that you went to school,” Briones said.