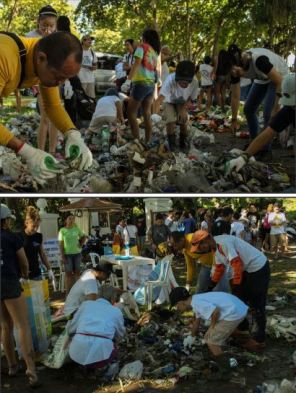 ONE FOR THE OCEAN. Sillimanians join the 32nd simultaneous International Coastal Clean Up and Brand Audit alongside other volunteers last Sep. 16, 2017 from Escaño Beach to Silliman beach. PHOTOS BY KENNO ELUM AND AL REMUEL TUBONGBANUA

About 50 Sillimanians participated in the 32nd International Coastal Clean-up and Brand Audit last Sept. 16 from Escaño to Silliman beach.

The International Coastal Clean-up (ICC) is a global activity participated by different countries.

He also encouraged everyone to stop using single-use plastics and to bring their own water containers, spoons, and metal straws.

“Things like that can create an impact; you just need to throw garbage properly and segregate it,” he said.

After the clean-up, collected trash was audited in order to specify which product brands had the most amount of garbage thrown on the shores.

As of press time, the audit has still not been released.