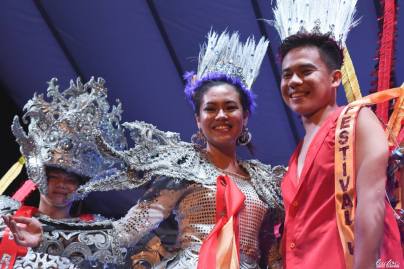 “Our festival is eco-friendly and nature friendly. It helps educate people that our island is not just a scary place full of voodoo dolls, but there are hidden magical beauties that are present in our island.”

Sillimanians representing organizations of students from Bohol and Siquijor were hailed as the Hibalag Festival
King and Queen 2017, last Aug. 22.

Eight pairs of candidates from regional sectors competed for the crown in line with the theme “Uprising Region
Through Festivities.”

When asked what makes his festival unique from others during the question and answer portion, Jasper said: “Our
festival is eco-friendly and nature friendly. It helps educate people that our island is not just a scary place full of voodoo dolls, but there are hidden magical beauties that are present in our island.”

He represented Dilaag Festival in Siquijor. This festival celebrates the name given to the province, Isla del Fuego, which means “Island of Fire.” It is said that the island is abundant with fireflies that when seen from afar, it literally looks like an island on fire.

“I was shocked because I wasn’t really expecting to win I was just enjoying the festival king and queen pageants,” he
added.

Meanwhile, the Hibalag Festival Queen Ivy Marie Salum, wore a silver costume that symbolizes the purity of metal in
Sandugo Festival of Bohol. This festival in Tagbilaran commemorates the Treaty of Friendship or the Sanduguan between Chieftain Datu Si Katuna and Spanish explorer Miguel Lopez de Legazpi.

“I feel really overwhelmed I did not expect I would win this thank you so much everyone,” Salum said.

When asked how she would promote the festival to a foreigner in the q and a, she answered: “If ever a foreigner comes here for the first time, I would let him [or her] experience the Boholano hospitality which Sandugo festival is trying to show us. Sandugo festival in the treaty of Sikatuna and Legazpi and with that they establish friendship among them and that is what I’m trying to say and to let that foreigner experience.”