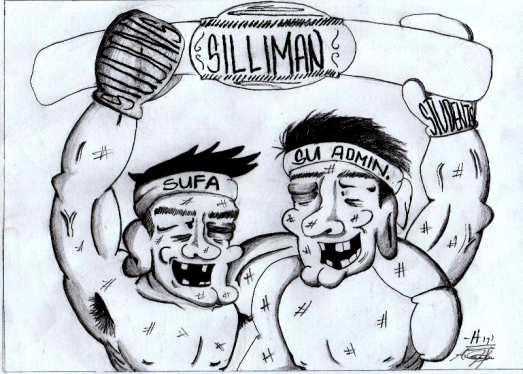 The dispute between the faculty union and the administration is finally resolved and now, education in Silliman University goes back to how it should be.

That labor strike by the faculty union marks two historical events: first, it was the longest negotiation of the union and the administration that lasted for one year and two months, and second the students proved to the entire university that they are not apathetic after all.

The students were not just there for SUFA but they were there, legally expressing themselves because they had their own claims.

Students were there, hungry for a valid explanation on the sudden increase of fees in the university but no improvement of facility.

the Weekly Sillimanian (tWS), then, commends all the students who marched with Silliman University Faculty Association (SUFA) during the labor strike.

By doing so, you have proven to everyone that you care to for what is happening in your realm and you practice your constitutional right to freely express your opinion. Continue expressing your concerns; do not be afraid to speak for as long as you are right.

tWS also commends the Silliman University Student Government for making a stand on this critical issue and for being the voice of the entire student body. Standing for the students’ welfare was never an easy thing to do but you attested it other way. You have proven that you deserve every vote casted for you. tWS hopes that you continue to be the strong student government that you are now.

tWS also commends the SUFA for being an inspiration to students. You have awakened the sense of activism among them. The paper hopes that as your salaries and benefits improve, the quality of service you give to students will also ameliorate.

tWS hopes, that should a crisis rise in the university, and the administration knows there is an immediate solution, do not let it reach to an extent where students’ education is compromised.

The three-day labor strike was a history in itself and we cannot do about it but look back and learn. Let us not forget what the strike has taught us, for it will be the university’s sentinel in the years to come.