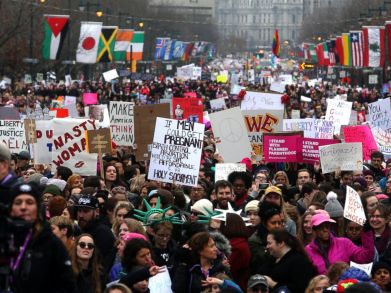 In a world dominated by men, women tend to be easily discriminated and disrespected. Women are often seen as vulnerable and fragile, like glass. Although the law protects the rights of women, the differing treatment the two sexes receive remains evident today.

In physical labor, women get easily discarded because of the perception that women are physically weaker than men. Even in a family setting, women are the usual targets of violence—may it be from her husband, her father, her in-laws, or even her brothers. Frequently, women are expected to keep a low profile, hindering them from speaking out. Although a woman is an embodiment of beauty, grace, and peace, a woman should never be afraid to unleash her inner voice.

The everyday struggle of women is complicated, exactly like a mathematical problem. But this should not hinder us from making a stand and fighting for it. Tim McGraw even said, “Everyone should have their own opinion and be able to voice it. No matter what it is. Of course, that does not mean your opinion is always right. But, you’re certainly entitled to your opinion.” Here are reasons why it is best to voice out your ideas rather than keeping it to oneself.

Silence helps the oppressor.
Cliché as it seems, it holds true. If you don’t seem to care, or you respond with nothing at all, it would make people think that you agree with what they think is best for everyone—and that predominating thought may be oppressive.

Not everything obvious for you is obvious to all.
Even if we have eyes to see what is happening around us, our assumption that everyone knows about a particular thing should be disregarded. Telling others what your opinion is can help enlighten them, or even change their perspective.

Some people out there might have your thoughts as well.
It may be unusual, but you will never know who agrees with your opinions unless you tell them so. Perhaps out of a hundred people listening to you, for sure there will be one who has a similar stand to yours. Remember, movements and revolutions happen because of people with the same ideas and sentiments.

Women deserve more than being treated like they’re a little less. Women deserve to be treated equally. Just like the Women’s March on January 21, where thousands of people supported and joined voices in protest, we should not be afraid to tell the world what we really feel. You may be a woman, a man, or any gender you identify with in the spectrum, but your voice should never be encaged from defending what is right.