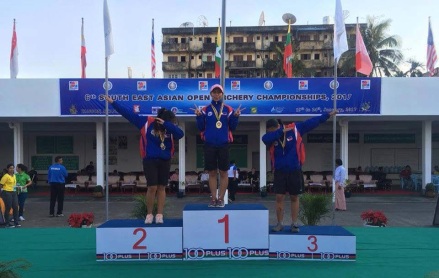 The individual category was dominated by the Philippine team after two other Filipinos grabbed the first and second places.

“Our coaches told us that it was their first to see all Philippine players standing in the victory stand. I was super happy to bring honor to my country, family and to God. This competition helped me connect with other people in [South East Asia]. It also helped me become more independent, since both my parents were not there,” Tagle said.

Tagle is among the newest additions to the Philippine team.

“Throughout the competition, I learned different techniques and the newest equipment. It also helped me gain confidence,” she added.

After her successful stint in the South East Asian Archery Championships, Tagle is back to training and practice for the Asia Cup in Bangkok, Thailand this coming March 2017.

Moreover, in the team category, the Philippine team got the gold medal during the qualifying round. The team defeated Singapore, Myanmar, Thailand, Malaysia, and Vietnam and had to wait for their opponent after ranking first at the end of the qualifying rounds.

In the gold medal match, the Philippine team won against Hong Kong in the score 6-2.

Another Silliman alumna, Olympian Jennifer Chan, also got the gold medal in the Compound event.