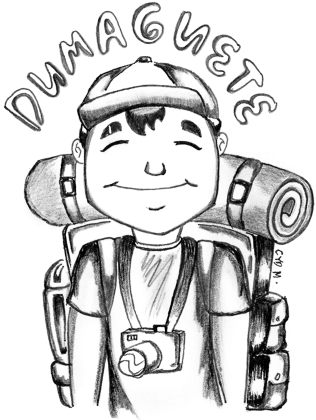 In the Philippines, fiestas are full of events or activities that promote the city’s culture. Every year, Dumaguete celebrates the feast of Saint Catherine of Alexandria, also known as Saint Catherine of the Wheel and The Great Martyr Saint. Such events have attracted townspeople and tourists from neighboring places which, at the same time, provide an opportunity to expose Dumaguete’s rich culture—may it be in the form of an artwork, through delicious food, or even with the melodies of music.

Dumaguete is known to be a city of gentle people. And aside from that, this city can give anyone the feeling of rural living in a province setting. Though it may not be as commercialized as other cities in our country, it has a lot to show off to the world. When it comes to the arts, the Dumagueteños have an extraordinary and exemplary taste.

Dagit: Local Arts
The first of its kind in Dumaguete, a trade show entitled “Dagit” was held last Nov. 24 at the Madeleine Café. The term dagit was based on the city name’s origin, which means “to swoop” or “to snatch.” In other words, this event wanted to lure people in and make them appreciate the beauty of the world of local arts. It also gave artists the chance to mingle with other people having the same passion in art—a passion which could affect individuals in many ways.

Art provides comfort. Bernice Delanto, an illustrator, considered scribbling on a sheet of paper an outlet to provide 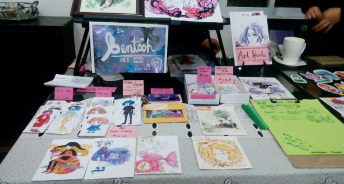 her with confidence when speaking with her students online. The scribbles may just be so random, but it holds something valuable to the artist.

Art changes people. It can transform people’s lives, and give them a better perspective in facing the world—just as how Lumago Designs give disadvantaged women opportunities to handcraft beautiful accessories from recycled materials. It does not only alleviate them from poverty, but can also help preserve the environment and promote local arts. No matter how expensive or cheap the materials are, a passionate artist will always get the satisfaction of his or her artwork.

Art reflects personality. By closely looking at an artwork, you could feel the emotions of the artist. Not only that, but also how the artist sees one’s self, and depicts one’s world in a way that not everybody can appreciate. But still, in any way, art can make your jaw drop.

Seeing the works displayed on the table, one couldn’t help but smile and be fascinated. There were stickers, postcards, bookmarks, pen holders, and jewelries—a lot to choose from.

Organized by Aletheia Cediño and the Nomadic Collective, they sure would like to host another trade show event sometime next year to lure more people into the local arts industry. Since local arts are not so common with the larger community, trade shows such as “Dagit” serve as a bridge connecting the full-of-thoughts artist to the not-into-arts kind of people—a remedy in solving the problem of a lack of opportunities for local artists.

Touring around the city, you could notice all the restaurants or vendors around every corner selling a variety of food. In addition, local bands can also be seen in some restaurants, which could mean that people in this city are musically inclined.

Duma Comida: Food and Music
A foodie is an enthusiast of food, and when a foodie collaborates with other foodies, a grand food trip fit for the whole family awaits the community.

Inspired by Manila’s “Mercato Central” and Cebu’s “Sugbo Mercado,” Ela Clavano, along with her two brothers, and Rachelle Jamora were the brilliant minds behind this year’s “Duma Comida” along the Rizal Boulevard on the 26th and 27th of November.

Featuring start-up entrepreneurs, with the variety of food available, one could sure boost the food trip experience with friends and family members in this two-day event. There were vendors selling desserts such as cupcakes, and viands such as barbecue, soup, and lechon. People were busy taking their orders, some were busy looking for a table, while most were busy munching on their food.

Meanwhile, music fills the air as local singers of the city perform live. With every strum of the guitar, the beat of the drums, and the soothing voices of the singers, it sure attracted and calmed the customers who were still waiting for their food to be served. 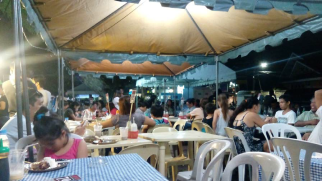 Most of all, the ambiance of being in a family was felt throughout the night. Some former classmates were reunited, families bonded with each other, sweet couples and even foreigners enjoyed the whole event. Even if it rained abruptly on the first night—though it did not take long—people still came and continued to embrace the rich culture of Dumaguete when it comes to food.

Together with the help of the Tourism Office of Dumaguete, the organizers and the vendors made the night life of the city livelier.

The food, the art, and the music are just a part of Dumaguete’s rich and varied culture. There are more to experience and love in Dumaguete, and not just during fiestas. The “Dagit” and “Duma Comida” events tell the commoners what Dumaguete is like in a nutshell.