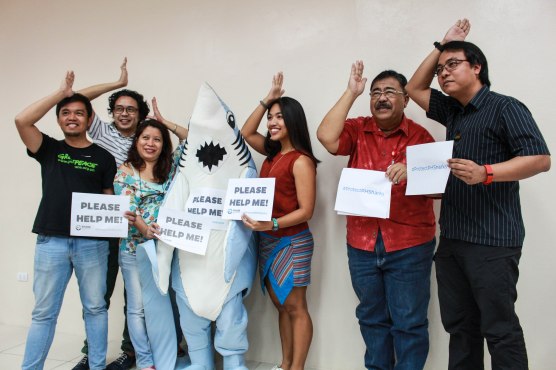 SAVE SHARKS. Respected speakers do the fin pose during the 2016 Shark Summit round table discussion held on November 11 at Guy Hall. PHOTO BY Kenno Elum

AS PART OF the shark conservation week, a youth forum on oceans and sharks was participated by around 20 young people coming from Negros, Cebu, and Zamboanga.

According to Anna R. Oposa, Executive Director of Save Philippines for the youth because young people are usually not involved in the dialogue for shark conservation.

“You only ask policy makers, you ask the Bureau of Fisheries and Aquatic Resources, you ask NGOs, but the voice of the youth is not always considered,” Oposa stressed.

AA Yaptinchay, Director of the Marine Wildlife Watch of the Philippines, stated that this forum is especially significant for the youth given that they’re the future leaders.

Lectures about the importance of sharks to the oceans by Yaptinchay and addressing issues on shark conservation through programs and campaign by Vince Cinches of Greenpeace Southeast Asia (Philippines) were presented.

The participants also took part in a workshop in the form of role play. It process on how to protect the species and sharks in the Philippines.

“We’re making the youth think on how they can protect sharks kahit laro – laro lang and hopefully they will get something out of this,” Yaptinchay said.

The activity was organized by Greenpeace, Marine Wildlife Watch of the Philippines, and SPS. They aim to promote shark fishery management, shark protection, and shark conservation here in the Philippines.

This forum was part of the series of events of the shark conservation week that included an exhibit and petition-gathering booth in Robinsons Dumaguete, a mural painting on saving the sharks, and a two-day summit which focused on shark and ocean conservation all supported and attended by Sillimanians.

The forum was named “Anak ng Pating.” It was held at the American Studies and Resource Center last Nov. 9.