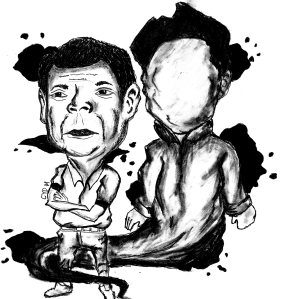 In his speech to the military troops of southern Mindanao last Aug. 9, President Rodrigo Duterte threatened Chief Justice Maria Lourdes Sereno that he would declare martial law if the Supreme Court tries to hinder his efforts against drugs.

The feud ensued when the chief justice sent a letter to the President, emphasizing the importance of due process in publicly releasing the names of judges accused of being involved in drugs.

Many were shocked, many were mortified, but there are those who rally in support of his statement. It is antagonizing to think that a nation which struggled through a dark era of Martial Law, and is still struggling because of its many effects, is alright with being shackled once more to the same chain.

Barely two days later, Duterte apologized to Sereno, stating that he never intended to say such harsh words and offend the chief justice.

Duterte may have already taken his statement back, but the bitter words that shot out from his mouth were plastered in both local and international broadsheets, and were recorded on videos which will resound to those who warned us of the great possibility of martial law while he was still campaigning for office.

Martial law means he will have complete power. He may have promised zero percent corruption in government, but that is unachievable if we lose transparency and independent media coverage. That is impossible if he will discredit the clamor of the masses just to fulfill his ultimate goal.

The possible declaration of martial law is something we should look out for.

We should be insurgent in Duterte’s candor in declaring such statements, because the materialization of such is just at the tip of his pen. Add in his impulsiveness and careless decision-making to the mix, and the chances only get higher. We could sleep peacefully one night and then wake up with the effectivity of martial law the next.

President Duterte, who promised a governance not of the traditional politician, and laid out plans that sounded very reassuring, suddenly blurts out a horrendous threat? Does it not ring a bell? The late President Ferdinand Marcos started out with a very promising administration, but it ended up in a bloody and traumatizing regime.

We just hope the Filipinos are hearing a coincidence and not history waiting to repeat itself.

As youth who are instruments in peddling this nation to supremacy and greatness, we should make sure that it is change and not chains that is coming.